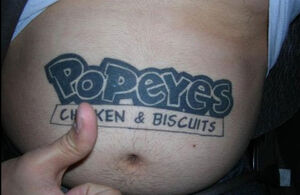 Oh God, just, so good. Worth going to Dan's house for.

It is Elliott's dream to one day become famous enough that Popeyes will pay him in chicken to appear in their commercials. (Episode 51: X-Men Origins: Wolverine @28:30)

Elliott's fingers are often said to be covered in Popeyes grease, most notably in the Flop House Slash Fiction.

“­Popeyes restaurant is named after Popeye Doyle, let's just get that straight.”
—Elliott @44:55

“­The name Popeye did not come from the spinach-eating cartoon character but from the hard-nosed film detective Popeye Doyle in The French Connection.”
—The New York Times, Al Copeland, a Restaurateur Known for Spice and Speed, Dies at 64,
Martin Douglas, 25 March 2008

“­My dream one day is to be famous enough to do an ad for Popeyes and have them pay me in chicken.”
—Elliott @28:35

Retrieved from "https://flophousepodcast.fandom.com/wiki/Popeyes_Fried_Chicken?oldid=37039"
Community content is available under CC-BY-SA unless otherwise noted.