Many cineastes have a favorite theater. Dan's preferred venue appears to be onboard a commercial airliner. 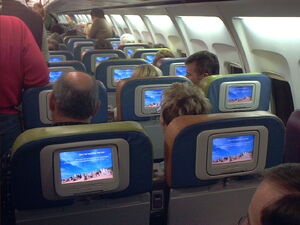 12 Years a Slave (2013) by Steve McQueen
“­I did once watch 12 Years a Slave on a plane, because I knew that I was not gonna watch otherwise. I was like: 'This movie is gonna make me too upset otherwise. So the best time to watch it will be when I'm literally strapped into my seat.'”
—Episode 174: That Awkward Moment @59:45

National Treasure: Book of Secrets (2007) by Jon Turteltaub
“­And let me tell you—you know, on the flip side—if you're going to watch a movie on a plane that gonna keep you paying attention the whole time... I'm not saying it's a great movie. I'm not even gonna say it's a good movie, necessarily. But I was so entertained by Book of Secrets.”
—Episode 14: Bratz @48:15

Retrieved from "https://flophousepodcast.fandom.com/wiki/Movies_That_Dan_Watched_on_an_Airplane?oldid=38304"
Community content is available under CC-BY-SA unless otherwise noted.