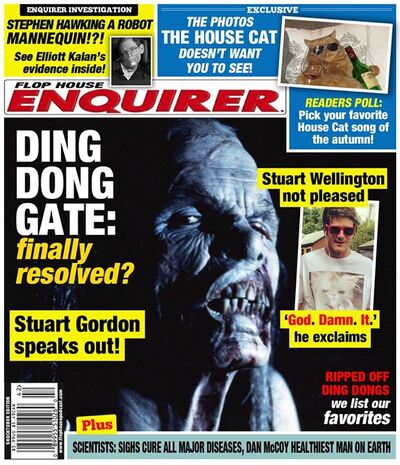 Running argument among the Flop House community and hosts that erupts every third episode or so.

Repeatedly since Episode 53: Hannah Montana: The Movie, host Stuart Wellington has insisted that a "ding-dong" is ripped off during the course of his oft-recommended movie Castle Freak. He cites it as a prime reason to watch the film and as an attraction comparable to the classic scene in The Invisible Maniac in which a guy gets choked with a submarine sandwich.

However, in the Listener Mail segment of Episode 92: Country Strong, a listener reported that he had recently watched Castle Freak, and observed that the titular freak/castle resident appears to be missing his ding-dong, but never actually rips it off on-screen.

Stuart blamed this on the listener's accidental viewing of an R-rated copy of the film, which the listener didn't bother to follow up on. There is a scene in which the titular freak rips off his own thumb to escape some handcuffs, or shackles, or something, and it maybe kind of looks like a ding dong, because he is all messed up.

In Episode 108: Passion Play, Dan McCoy revealed that he had watched the film and verified that there was no on-screen ding-dong ripping. He had also done additional research into the rare unrated edition of the film and found no evidence of excised ding-dong related content.

Despite this new information coming to light, Stuart continues to recommend Castle Freak based solely on its inclusion of a violent penectomy rather than focusing on its many other charms (such as Jeffrey Combs' chilling performance...or...the castle?).

Elliott appears to have no opinion either way on the matter. 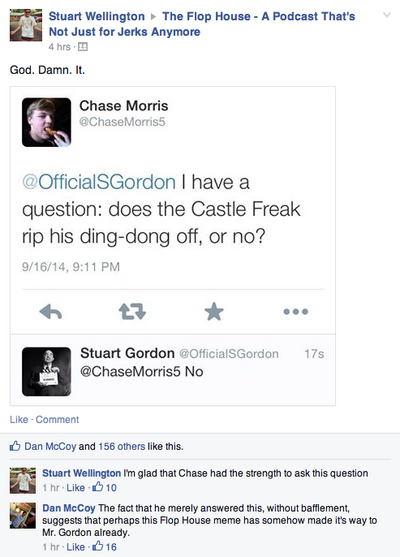 Retrieved from "https://flophousepodcast.fandom.com/wiki/Dingdonggate?oldid=38117"
Community content is available under CC-BY-SA unless otherwise noted.