From Wikipedia: "A robot is a mechanical or virtual agent, usually an electro-mechanical machine that is guided by a computer program or electronic circuitry." The word "robot" originated in the Czech play R.U.R., and is based on a Czech word meaning "serf" or "worker."

Microchip Off the Old Block
A mid-sixties Disney film about a robot boy. Starring Kurt Russell as The Father and The Robot, Don Knotts as The Crazy Inventor, and Dean Jones as The Suspicious Neighbour. He also turns into a dog sometimes.
Episode 61: Surrogates

P2: Pudgment Day
A chronoassassin arrives from the future, made of organized chocolate. It can assume any shape, although in practice it sticks to primarily bunnies, squares, footballs, and creme eggs. (That's how they figure out it's the chocolate robot -- there's no creme in the creme egg.) It's not very dangerous, because it's chocolate. You want to eat it though, because it's delicious.
Episode 77: Skyline 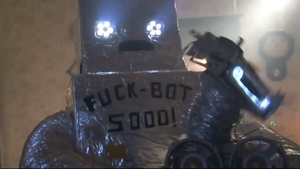